SERDANG, April 8 – The Malay Heritage Museum, Universiti Putra Malaysia (UPM), the first of its kind in the country was launched today at Faculty of Modern Languages and Communication (FBMK) here.

UPM Vice Chancellor, Prof. Dato' Dr. Mohd Fauzi Ramlan, said although there are other museums in Malaysia which exhibit Malay heritage, UPM museum features not just a name but the uniqueness of Malay heritage collections focusing on its true identity through the exhibition of ancient Malay and religious manuscripts, high quality textile, wardrobe and weaponry collections.

"There is one and only manuscript kept in the museum which is specifically discussing about the Taming Sari kris. In addition to the indoor exhibits, the museum also has three outdoor exhibits consisting of over a-hundred-year-old traditional Malay houses of Negeri Sembilan, Perak and Terengganu. 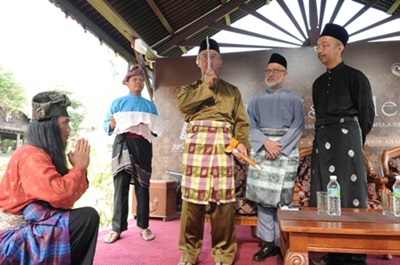 "Previously, a museum that features Malay heritage is only available in Singapore and therefore, our country requires an establishment of an institution to foster research, publication, education, teaching and learning, as well as displaying artifacts related to the Malay culture," he said in his speech at the launch. Also present were FBMK Dean, Assoc. Prof. Dr. Abdul Mua'ti @ Zamri Ahmad and Museum Director, Dr. Muhammad Pauzi Abd. Latiff.

He said the museum's specialties are religious manuscripts such as handwritten Quranic verses as well as other manuscripts of other religions, early writings on sailing and navigation used by Malay seafarers, medical manuscript or also known as the Thib and manuscripts relating to weaponry, especially on forging blades.

He hoped that the UPM Malay Heritage Museum will be a place for students, researchers and the community within and outside the country to deepen their understanding in the Malay culture and civilization.

"As a museum at a research university, it will be a symbiosis of expertise from all areas such as language, literature, communication, design, food science, agriculture, forestry, medicine, material science, metallurgy, textile science, sociology, anthropology, psychology and other related fields in delving into the ancient wisdom of the Malays and unlock the secrets of the intellectuals," he said.

Woven fabrics and patterned by ancient Malay designers such as the limar, pelangi, cindai, kelingkan cloths and they were produced through the knowledge in art and science. For example, the cindai cloth is a woven fabric made out of fiber extracted from herbs that is believed to also be used as an antidote. Now everyone has an idea why Hang Jebat was still be able to survive up to five days after being stabbed by Hang Tuah, as it was told that the wound was wrapped with the cindai cloth.

The collections consist of garments for men, women, and kids such as shirts, pants, skirt-type adornment known as samping, various types of cloths and head dresses for men known as tanjak. Also included in the museum's wardrobe collections are accessories that are worn with the garments such as belt buckles known as pending, girdles, belts, brooches and necklaces. In addition to display the subtle art of the Malays, these collections also demonstrate on how the ancient Malay community designed such garments according to function and situation.

Showcasing unique Malay weapons such as cannon known as lela rentaka, spears, harpoons, machetes, swords, various types of knives known as tumbuk lada and badik as well as a series of kris collections. Kris is not only designed to be used as a weapon but also used to protect pride and dignity. It is also displayed as a unique piece of art and often crafted with top-notch quality. Since 800 years ago until today, kris has remained so close to the hearts of the Malays.

Among other unique artifacts on display is a flint lighter known as Gobek Api. It is a small device used to light a fire, which was invented through the wisdom of the ancient Malay community. It consists of combined skills in physics, chemistry, and biology and its function is essentially based on the concepts of pressure, compression and friction. History of Gobek Api is only found in the Malay world, especially in the north and used in the 17th and 18th centuries. The Malays had used Gobek Api about 100 years before the west created matches and it took another 130 years later for Ronson, an American company to invent modern lighters. Unfortunately, today, the creation of Gobek Api has been patented under the name Fire Piston by a United States-based company.

Outside the museum’s premise, there are three traditional Malay houses have been re-assembled. The first is the house of Dato’ Raja Diwangsa, also known as the Negeri Sembilan house. The second is the Perak traditional Malay house and also known as the Kutai house, while the third, which is being re-assembled now, is the Terengganu house. For references, the Negeri Sembilan house is representing the southern zone, the house that is built on the low ground, the Kutai house represents the northern zone, the house that is built on the river banks. Meanwhile, the Terengganu house represents the eastern zone, the house that is built by the sea. The students, researchers and visitors will be able to see clearly their architecture and how these traditional Malay houses are built based on location and area.

The exterior of the museum

There is a hut built to place a rubber machine that will demonstrate on how rubber, which is one of the country's main products, is tapped from the trees and processed into sheets. This process will reveal to students, researchers and visitors on how smallholders among Malay community undergoing their daily economic activities.