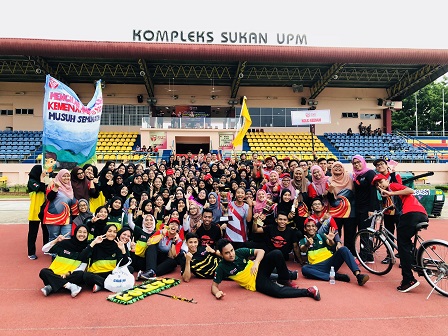 SERDANG – Sixth College (K6), Universiti Putra Malaysia (UPM) has once again emerged as overall champion for the College Athletics Championship after winning 18 out of the 32 gold medals contested.

The SUKOL games is an annual  core sporting event for UPM with the objective of discovering new talents as to nurture potential athletes from the university.

The K6 Team Manager, Nurul Fatihah Mohamad Tahir, said that even though the athletes had only two weeks training, they still emerged overall champions.

“We are proud of our achievements even though we felt it would be difficult as most of the K6 athletes were inexperienced,” she said.

A K6 athlete, Faris Hazim Jamaluddin who is a first year Bachelor of Communication student from the Faculty of Modern Languages and Communication, was chosen as the Championship’s Best Male Athlete.

The Best Female Athlete was Nur Khairunisa Alias from the KTDI team, a third year Bachelor of Science (Chemical Petroleum) student from the Faculty of Science.

Faris Hazim said that he is grateful and proud of his first win at SUKOL and is determined to participate in more sport meets to contribute more medals for K6.

He also expressed his thanks to the chief and team manager for accommodating to the athletes’ needs which lead them to successfully maintain their position as overall champions. -- UPM