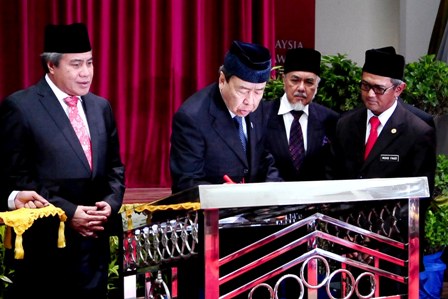 On the occasion of the visit, Sultan Sharafuddin was briefed on the development of UPMKB by UPM Vice Chancellor, Prof. Dato' Dr. Mohd Fauzi Ramlan and signed the plaque, symbolizing the opening of UPMKB.

The MoU is aimed to strengthen collaboration between the two sides in the field of agriculture and the implementation of community development activities in Bintulu through agricultural extension programmes, besides being the pathway for students’ skill development by providing industrial training under BDA agencies.

The Sultan planted the Engkabang tree in front of Dewan Sri Kenyalang, UPMKB as a sign of his visit. The oil from the fruit is said to resemble the taste of butter.

In the evening, Sultan Sharafuddin, said researches in agriculture, forestry and environment are able to be used in protecting as well as managing the environment effectively, through the implementation of systematic plans by the university.

He also said, the effort will be beneficial for both UPM and the Sarawak government, since Bintulu area is included within the Sarawak Corridor of Renewable Energy (SCORE) development programme.

"I believe in the potential and strength of UPM in the field of agriculture, agro-based industry, marine and natural resources will support the development of SCORE effectively, at the same time, providing more employment opportunity throughout its implementation," said the Sultan during the dinner with the Chancellor event, at the Millennium Ballroom, Parkcity Everly, Hotel here.

The next day, Sultan Sharafuddin spent about three hours touring Similajau National Park and was briefed about the park’s uniqueness and its forest management by the Sarawak Forestry Corporation.

The history of UPMKB began when the branch campus was temporarily established in Semenggok, Sarawak in June 1974, before it was closed on January 10, 1992, to pave the way for the establishment of Universiti Malaysia Sarawak (UNIMAS).

In February 2001, the Ministry of Education (MOE), through a letter from the Secretary-General, stated the consent of the Minister, allowing UPM to re-establish its campus branch in Bintulu, started with its 2001/2002 academic session, focusing on areas of Agriculture and Forestry. – UPM